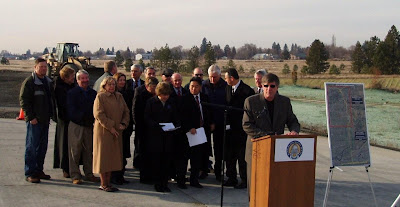 State lawmakers Lisa Brown, Chris Marr, and Timm Ormsby held a news conference earlier this morning to propose a much smaller version of the stretch of the North Spokane Corridor between Francis Avenue and the Spokane River.

Due to funding issues, they're proposing the following changes:

•An interchange northwest of the Esmeralda Golf Course would be added later.
•The road would have four lanes instead of eight.
•Plans to put parts of the freeway below ground level would be shelved.

I was personally glad to hear that the bike/ped path will remain. And the WSDOT will still own the right of way required to build the original-planned freeway, so when the money becomes available they can expand.


I heard some local DJs talking about this on the radio this morning. Their take is that the new plan sounds just like Division, minus the traffic lights. What's your thoughts on this proposal?
Posted by SRTC Staff at 8:13 AM

The two main problems is not lowering the road through Hillyard and postponing the Wellesley interchange. Lowering the road was to control the noise from the freeway, and without an interchange at Wellesley the Hillyard business district will be left out of the business generated by the freeway. I do realize this is probably the only way to get it built, and four lanes instead of eight is probably the best way to get it started.

Well, I guess the good news is that the WSDOT will still own the right-of-way required to build the original-planned freeway, so when (or if)the money becomes available they can always expand and build the four other lanes later. I was personally glad to see that the bike/ped trail wasn't in danger of being axed.