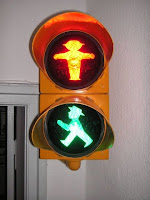 I've never been to Germany so I didn't know what a big deal their "traffic-light men" are. In the east of the country, pedestrian lights show little men, some with hats or walking sticks, when it's safe for pedestrians to cross the road. These lights are even tourist attractions in many towns.

The tradition of showing the little men started more than 50 years ago, but may come to an end soon. There is an effort underway to introduce gender equality by using "traffic light women" as well. Not everyone agrees and even a major newspaper isn't sold on the idea, instead offering a compromise of using "traffic light couples." The lights will have to be huge to accommodate that.

Here's the link to the Washington Post article on this. There's also a picture of the traffic light woman there that's kind of funny. She looks a little bulky but hey, I guess it's a start.
Posted by SRTC Staff at 8:57 AM

Email ThisBlogThis!Share to TwitterShare to FacebookShare to Pinterest
Labels: Pedestrians