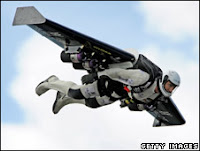 You thought they were just a gimmick used on 'The Jetsons,' but a Swiss man has become the first person to fly solo across the English Channel using a single jet-propelled wing.

That's right, the man ignited jets on a wing on his back, jumped out of the plane that had taken him up, and flew 22 miles in less than ten minutes! Here's the video, and it's amazing!
Posted by SRTC Staff at 9:05 AM