I'm In Love... With Olympia's Bike- And Walkability 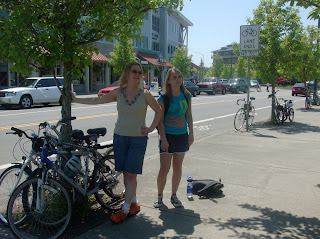 I thought it needed a change of scenery so I took SRTC's Commute Trip Reduction bike on a roadtrip this weekend. We went to Olympia to visit my friend Holly (seen here with her daughter Sarah who looks as bored as is required of a teenager). We spent all weekend riding the many bike trails in the area. In this picture, we had ridden to the farmer's market downtown and there were so many bikes we had to lock ours to trees as all the bike racks were full. I was impressed with how pretty much every street (besides the ones through purely residential areas) had bike lanes on both sides of the streets. We rode all kinds of places that I would be nervous to go on a bike in our area. 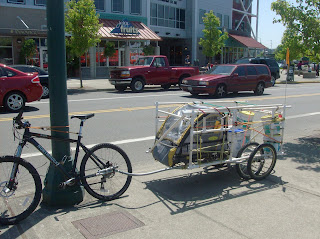 And not only were a lot of other people riding also, but they were coming up with some pretty creative ways to utilize their bikes, such as this trailer made of PVC.

The walkability was also impressive. When we got the itch to take in the nightlife Saturday night, we walked downtown. At 10:30 at night! And it wasn't considered weird, as everything is close together and centered around the downtown area. So close in fact, that most the area kids ride everywhere. We kept bumping into Holly's kids all over town, and when I would ask how they had gotten there, they would say they had ridden their bikes. And she hadn't even had to nag them to go outside and quit playing video games.
Posted by SRTC Staff at 9:43 AM