A big thanks to Coffman Engineers for their very enthusiastic energizer station this morning as part of Bike to Work Week. They had an army of volunteers on the sidewalk in front of the Bank of America building on Riverside this morning, handing out goodies. And I'm not exaggerating, it was a very LARGE group of volunteers to be out so early.

By the way, I got my bike out to ride this week. It's definetely an oldie (got it when I was 21 and mountain bikes were all the rage), but that's not what I've been getting flack about. Apparently, some people don't like my license plate. 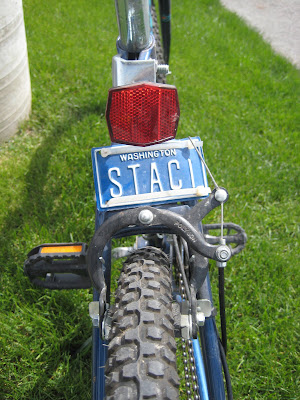 Thanks for the kudos! We enjoyed being out there offering goodies!

It was a lot of fun! We were excited to see all those bikers out there!

Glad to hear you had a good turnout. The folks doing the energizer station at REI said Monroe is so scary to ride on that they only had a handful of riders stop by.