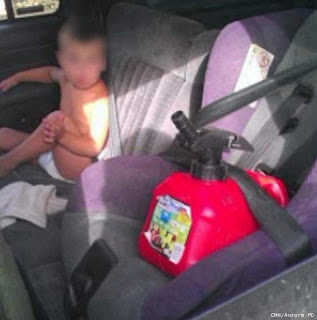 At $4 a gallon, I can't afford to spill gas either! Replacement babies can be bought on the internet these days though. Just kidding, don't get angry. This photo, taken by a Denver police officer, shows a crazy lack of concern for this child.

The Colorado Department of Transportation posted the photo to Facebook, where it's getting a ton of outraged comments.

The officer pulled the car over for making an impropert turn and found the toddler, a 14-year-old passenger and the driver all not wearing seat belts. The driver was ticketed obviously.
Posted by SRTC Staff at 8:39 AM

Email ThisBlogThis!Share to TwitterShare to FacebookShare to Pinterest
Labels: Crazy