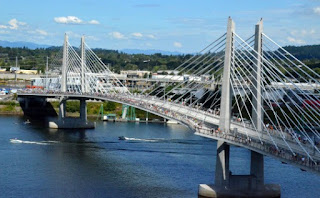 Portland's new "Tilikum Crossing" bridge opens in a couple weeks but this past weekend almost 50,000 people came out to walk or ride across it during a sneak preview day, according to Streetsblog.

The bridge is such a big deal because it's the first bridge in the United States to carry only buses, bikes, trains, streetcars and pedestrians, but no private vehicles.

Event organizers were shocked at how many people showed up to give the bridge over the Willamette River a try but figure it's a great sign as to how many people will probably use it when it's officially open.
Posted by SRTC Staff at 10:56 AM