Signs Of The Future Could "Talk" To Your Smartphone 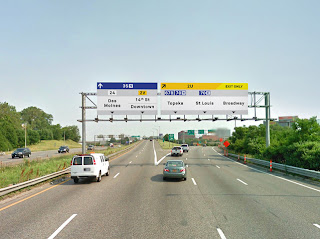 No one is arguing that the current highways signs are so 1960s, but is a makover of them in the works? While it's not officially on the Department of Transportation's 'to do' list (at least not that I've heard of),  Icon Magazine asked a San Francisco design studio to come up with some alternate sign looks just for fun.


The team came up with muted gray signs, using simple geometric markers in place of the existing shield symbols. But the most radical components of the redesign is that the signs would 'talk' to your smartphone! That's right, the group’s proposal calls for every exit sign to be fitted with a wireless transmitter, connecting it to a smartphone app, that would update with information on restaurants, gas stations, and local points of interest found at the exits ahead. Pretty cool huh? No more need for those signs that say 'McDonald's' or 'Hooters' on them. Co.DESIGN has more on these signs of the future.
Posted by SRTC Staff at 9:18 AM