Cool Find In Our Old Files Has History Of Spokane Bridges 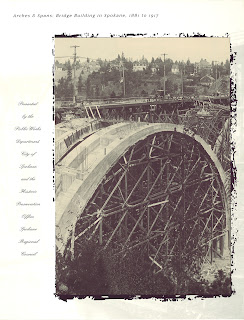 I've been digging through 30+ years of old files here at SRTC for the past several months, in an effort to condense the huge amount files we are storing and to better organize our system and familiarize ourselves with what we even have in the files.

In the process, I've come across a few surprises, some really old documents and a lot of junk I can't believe we even saved in the first place. I made what I consider to be a pretty cool find yesterday though: this publication called Arches & Spans: Bridge Building in Spokane, 1881 to 1917.

As near as I can tell, it was printed in the early 1990s when SRTC was known as the Spokane Regional Council and had the Historic Preservation Office under our purview (hence no 'T' for transportation in our agency name at the time as we apparently dealt with other topics than just transportation). Our office was located in Spokane City Hall at the time also.

I find this item particularly interesting because we (staff here at SRTC and at other agencies and our Board members) have been talking a lot about our infrastructure, especially our bridges, being almost 100 years old lately. And while I thought that was just a generalization or an exageration, this publication drives the point home that many really ARE a century old. Some of the bridges mentioned in here, like the Monroe Street Bridge, have been reconstructed in recent years. But other, like the Latah Creek Bridge, are still the original structures. A study was just wrapped up in fact, to determine what to do with the bridge to bring it up to today's standards and make it safe.

The pictures are what I found to be really cool though. It's amazing how much wood went into building those old bridges and how engineers working without the convenience of today's technology could create something as magnificent and forward-thinking for the times as the Monroe Street Bridge.