Some Residents Say New Street Lights Are Too Bright 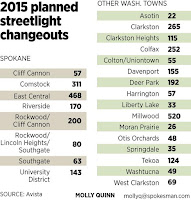 It's a catch-22. You want to feel safe walking on your street after dark in a well-lit environment, but According to the Spokesman-Review, some Spokane residents are complaining that new LED streetlights recently installed by Avista are too bright.
you also want to be able to sleep at night without having your room lit up like it's daytime.

Avista is replacing 3,000 of the company-owned sodium orange streetlights across the state this year, including in eight Spokane neighborhoods and several small towns around the area, including Tekoa, Clarkston, Colfax and Deer Park. The replacements are more energy efficient (they are estimated to reduce energy usage by 40-50 percent, and last three times longer than the old style) and "greener" in general. LED lights are recyclable and do not contain mercury, like the sodium lights being replaced.

Avista says that the energy saved by the bulb replacement project could power 2,300 homes.

Not everyone is happy with the lights though. Some residents in the neighborhoods with the new lights say they could read easily in the street. There have been complaints from residents of other cities that have switched to LED also. In Davis, California, residents were so upset by the glare of the new lights that city officials replaced them with lower-wattage LEDs with a warmer glow.

It's not clear at this time what will happen but Avista officials say they are willing to work with citizens on the issue.