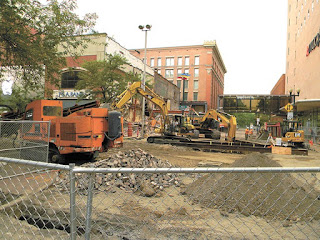 Citizens are invited to participate in a public meeting to discuss the design of a block of Wall Street downtown. The meeting is Tuesday, Nov. 3, from 4 to 5:30 p.m. in the Council Briefing Center in the lower level of City Hall, 808 W. Spokane Falls Blvd.

The meeting follows a separate meeting on the design that was held in July. The November meeting will look at concepts and materials that resulted from earlier input.

The City of Spokane is looking to update Wall Street from Main Avenue to Spokane Falls Boulevard, following a project to install a sewer main. Crews are currently installing the pipe and plan to cover the construction area with a temporary surface. In a second phase, planned for spring of 2016, the City will install a new surface on the street and add lighting and landscaping.

Wall Street from Spokane Falls Boulevard to Riverside Avenue is a brick street, designed for greater pedestrian activity.  The need for utility work in the block between Spokane Falls and Main provides an opportunity to update the street design, improve its pedestrian appeal, further activate its use for events, and help lead people to a renovated Riverfront Park.  The City eventually would like to extend the new design on the block between Main and Riverside.
Posted by SRTC Staff at 8:36 AM

Email ThisBlogThis!Share to TwitterShare to FacebookShare to Pinterest
Labels: City of Spokane Construction