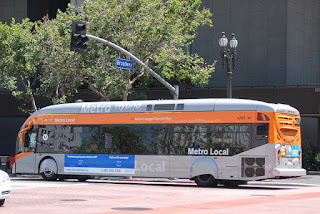 Are you a senior citizen? Then Los Angeles' Metropolitan Transportation Authority wants you. According to KPCC news, Metro is wooing baby boomers as, by 2030, one in five people in the Los Angeles county will be older than 65.

In preparation, Metro is taking steps to make transit more usable and appealing to older passengers such as adding extra elevators, color-coded priority seating, more space for wheelchairs and walkers, tactile paths on platforms and bigger fonts on signage.

The transit company admits that public transit isn't for everyone though and has some tips including to take advantage of fare discounts for seniors, there are also discounts for off-peak hours, be careful getting on and off buses and trains as falls can happen, and there are clubs of baby boomers who use the transit system and can help new users.
Posted by SRTC Staff at 11:10 AM