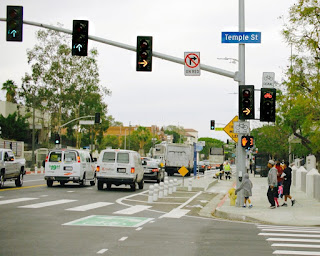 According to KPCC, the signals flash green, yellow and red lights to alert riders to go, slow or stop. The difference between the bike lights and regular traffic signals is that the bike lights are shaped like bicycles.

A particular challenge on streets where all modes of transit mix is that right-turning vehicles and bicycles must be in the same place at the same time, and it can become confusing whose turn it is to go, which is why the signals were introduced.

Another challenge for bicyclists can be crossing traffic to get to the left turn lane to make an unprotected left. New left-turn boxes, marked in bright green, will give these riders a safe place to go while waiting to make what would otherwise be an unprotected turn across the intersection.
Posted by SRTC Staff at 10:28 AM

Email ThisBlogThis!Share to TwitterShare to FacebookShare to Pinterest
Labels: Bicycling