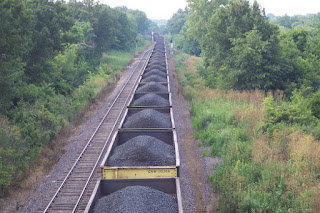 The railroad agreed to a two-year study of methods for covering rail cars carrying coal. BNSF will also spend $1 million on state environmental projects and clean up deposits of coal and petroleum byproducts near water.

The Spokane Riverkeeper was among seven groups that sued BNSF in 2013 under the federal Clean Water Act, saying coal particles and dust from trains is polluting the Spokane River, its Hangman Creek tributary and other Washington waterways such as the Columbia River and Puget Sound.

In late October, a federal judge ruled that BNSF could be held liable if environmental groups could show during trial that coal was being spilled directly from trains into waterways. In that case, passing trains could be considered pollution sources, he said.

Hundreds of BNSF trains ship coal to ports in Washington and British Columbia each year. Some of the coal is unloaded through the bottom of rail cars and other cars are flipped over to dump it out. The different unloading methods make it difficult to cover the loads.
Posted by SRTC Staff at 7:27 AM