LV Streetlights That Are Powered by Pedestrians 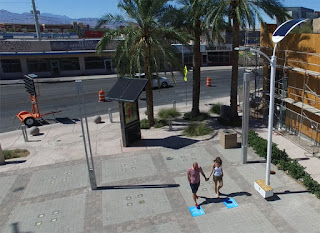 Where is the best place to test market street lights that work on pedestrian power? Las Vegas of course- where there are lots of people walking around.

According to Engadget, tech startup EnGoPlanet is testing new LED streetlights there that are powered by both photovoltaic panels and kinetic footstep pads. The setup not only lights up the Boulder Plaza in Vegas, but powers security cameras, WiFi hotspots and portable charging stations.

The system uses a solar panel to charge a battery that powers the LED streetlights at night along with the charging stations and WiFi hotspots. When the sun isn't out though, there are kinetic pads installed in the sidewalk that are connected to micro-generators that put out 4 to 8 watts per footstep, depending on the pressure. This powers those same items.

City workers can change the color of the LED lights for special events and the system even has sensors that can do environmental and air quality monitoring and "smart analytics," such as counting footsteps to determine the amount of pedestrian traffic.
Posted by SRTC Staff at 8:02 AM