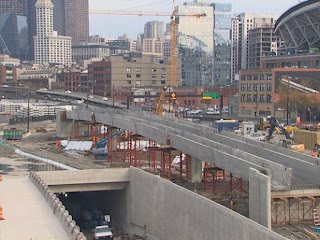 You've heard a lot about the tunnel being bored under Seattle for a new freeway, but what you haven't heard much about is a bridge now being constructed at the south entrance to the tunnel. According to KING 5 TV though, it's not just any bridge though, it's one that is designed to be earthquake proof.

The bridge will take traffic from northbound State Route 99 into the city. As drivers cross it, they will not see any significant difference between this bridge and traditional ones. This bridge is made largely of the same materials, such as concrete, rebar and pre-stressed concrete beams for the deck.

The joints are what is revolutionary though. They are made designed to be flexible, with reinforcing bars made from a special metal alloy that holds its shape, snapping back to its original position once an earthquake is over. A five-foot bar can stretch as much as five or six inches and return to its previous length. Conversely, once steel rebar is deformed, it holds that shape

The material is expensive and, at current prices, would add five to seven percent to the cost of the structure. The savings could come if an earthquake actually happens though. The bridge would allow the economy and society to recover far more quickly by remaining safe for people to use to keep traffic, and freight, flowing.