Lawmakers Come Up With Plan For Driver's License Issue 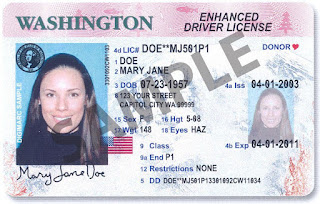 Lawmakers think they have a solution to
Washington State's battle over its driver’s license system. Federal authorities say the state’s current standard licenses don’t meet the requirements of federal law, which means that by 2018, you will need a different form of identification to get on a plane or into many U.S. government facilities IDs are checked.

According to the Spokesman-Review, a standard Washington license or identification card doesn’t say whether you are in the country legally, as required under the REAL ID law. The state has an enhanced driver’s license that meets those requirements, but to get one, a person must show up at a state licensing office with proof of citizenship, identity and residence. And, while a standard driver’s license costs $54 for six years, an enhanced license is $108 for six years.

The plan to fix this, sponsored by Senate Transportation Committee Chairman Curtis King, R-Yakima, and House Transportation Committee Chairwoman Judy Clibborn, D-Mercer Island, is to change the standard license so it says it’s not valid ID for federal purposes and to lower the fee slightly for the enhanced license so it would be $90 for six years.

The latter might not satisfy critics who say you can just buy a passport. At $110, a passport is cheaper in the long run than the current enhanced license because it is good for 10 years.

Bills by King and Clibborn will be discussed during the 2017 legislative session.
Posted by SRTC Staff at 9:01 AM