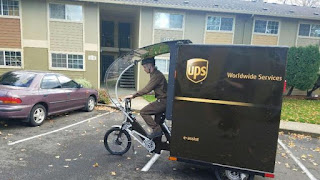 Forget the big brown truck, you will soon see a big brown bike in some neighborhoods delivering your goods.

According to Oregon Live, UPS is testing delivery by electric bicycle in Portland, a first for the company in the United States. The company has been experimenting with e-bike delivery in Europe since 2012.

It already uses a fleet of traditional bicycles during the holiday season in Portland, but the electric bikes are expected to be used year-round. They can cover more ground and carry more cargo because electric motors give the bike rider a boost. It is also easier to park in crowded areas than a large truck. And don't forget, they're emissions-free.
Posted by SRTC Staff at 9:25 AM

Email ThisBlogThis!Share to TwitterShare to FacebookShare to Pinterest
Labels: Bicycling