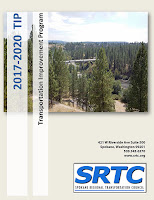 SRTC is looking for input from the public on a proposed amendment to the 2017-2020 Transportation Improvement Program (TIP) that would add one new project and change two items already in the TIP.


The TIP is a document that identifies projects slated to be undertaken or constructed during the upcoming four years. It includes project names and descriptions, the jurisdiction sponsoring them, funding attached to each project, and where the funding came from (local, state or federal funds). The TIP is updated throughout the year as SRTC’s member jurisdictions have projects to add, change or remove from the program, often as funding becomes available. The amendment currently being considered includes the following items:

Scour Protection for Bridges- The amendment would remove $196,599 from the amount programmed in 2017 for this Spangle, WA project because the funds obligated (were approved to be spent) in late 2016.

Metropolitan Transportation Planning- The amendment would remove the amount programmed in 2017 for SRTC planning activities because the funds obligated in late 2016.

More detail on the project is in the graphic below. Click on it to view it full-size. It can also be viewed on the SRTC website at www.srtc.org or a hardcopy is available by calling (509) 343-6370. 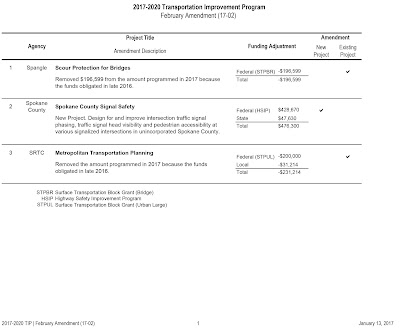