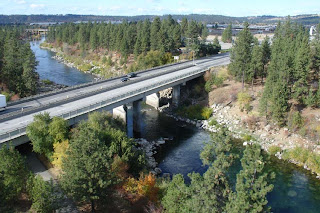 Replacement of the Sullivan Road Bridge southbound across the Spokane River in Spokane Valley moved another step toward construction this week with notification that the project has been awarded $3.5 million from the Washington State Transportation Improvement Board (TIB).


Plans to replace the bridge, built in 1951, have been in the works since 2010 after an inspection rated it as "Structurally Deficient." The deterioration prompted weight restrictions that were posted in 2011. Temporary repairs were completed in 2012, allowing the restrictions to be lifted.

A total of $15.8 million toward the estimated $19.7 million needed for bridge replacement has been secured. In addition to the $3.5 million from the TIB and $2.3 million in matching funds from the City, the project was awarded an $8 million grant from the Federal Bridge Program and a $2 million grant from the Washington State Freight Mobility Strategic Investment Board.
Posted by SRTC Staff at 10:06 AM