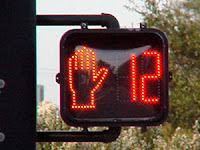 Spokane only started installing them a few years ago, and now a new study from the University of Toronto says pedestrian countdown timers might increase crashes!

The study showed that at at various intersections throughout Toronto over a four-year period, countdown signals resulted in a five-percent increase in crashes versus intersections without the special signals.

There is some good news though; the crashes were between cars, not cars and pedestrians for the most part, and at the most dangerous intersections the signals actually reduced crashes.

Here's more from Where the Sidewalk Starts.
Posted by SRTC Staff at 8:49 AM

Email ThisBlogThis!Share to TwitterShare to FacebookShare to Pinterest
Labels: Pedestrians