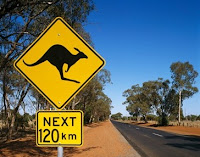 You know those deer whistle things you can put on your car that supposedly warn deer that you're coming and not to jump out in front of you on the road? Well that's child's play compared to what Volvo has recently developed.

NBC News reports that the car maker is working on technology to avoid kangaroos. Yes, kangaroos. Apparently they're a major nuisance to drivers in Australia, with around 20,000 hit by cars each year because they behave erratically when approached by vehicles.

The Volvo technology will include using a camera and radar to detect kangaroos and automatically apply the brakes. I'm thinking you won't be able to purchase the Volvo with kangaroo-avoidance system in the U.S.
Posted by SRTC Staff at 9:28 AM