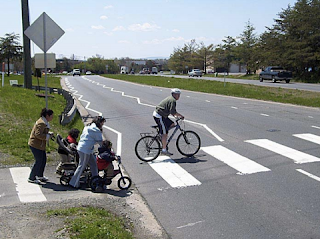 What do you do if you're driving down the road and all of a sudden the straight white lines stat to zig zag? This actually happens in Virginia and it's not because the paint crew was drunk.

According to Streetsblog USA, the unusual markings are a pilot project from the Virginia Department of Transportation and are meant to alert drivers that the Washington and Old Dominion (W&OD) Trail intersects with the road and it's likely bicyclists and pedestrians will be crossing the road.

After studying the markings for a year now, the Virginia DOT says they are effective and should become part of the Manual on Uniform Traffic Control Devices.


VDOT found the zig zag markings slowed vehicle speeds, increased awareness of pedestrians and cyclists, and increased the likelihood that drivers would yield. They also noted that the markings were effective even after drivers got used to them- they continued to slow down a year after they were installed.


The zig zag concept was imported from Europe. It is currently used in only two other locations in North America: Hawaii and Ottawa, Ontario.
Posted by SRTC Staff at 9:35 AM