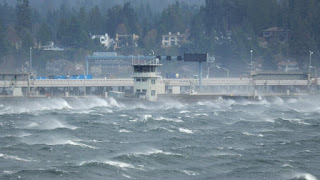 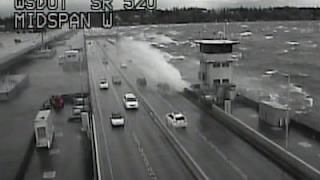 Did you see the pictures out of Seattle yesterday of the waves swamping the SR 520 floating bridge during a windstorm? They're pretty crazy.

The bridge was closed down, according to Q13 Fox News, after 50 mph winds slammed waves into the bridge deck and even threw driftwood into the traffic lanes.

The bridge was shut down at 2:30 p.m. Sundays for several hours and an inspection afterward revealed damage to the mechanical system that raises and lowers the draw span. Despite the damage, the WSDOT says the bridge is structurally sounds and is reopen to traffic today.
Posted by SRTC Staff at 9:42 AM