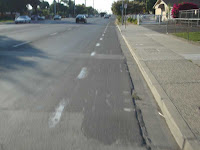 A common complaint in Spokane (after the number of potholes) is the lack of clear lane markings.
Striping wears off from weather exposure, age and plowing and sometimes it's hard to tell which lane you are in, or if there is even more than one lane.

Apparently humans aren't the only ones confused by bad lane markings; they play havoc with self-driving cars as well. Yahoo says the lack of markers caused Volvo's version of the self-driving car to refuse to drive itself during an event at the Los Angeles Auto Show recently. Apparently it was confused about what was the actual lane and couldn't make a judgement without striping to guide it.

Automakers are adding extra sensors that sense guard rails, barriers, and other lanes to combat this problem, but that adds cost to the price of the car- about $4,000 extra. Radar is also an option, as it uses radio waves to bounce of objects and determine where barriers are. But again, that adds cost for the buyer of the car.
Posted by SRTC Staff at 1:29 PM