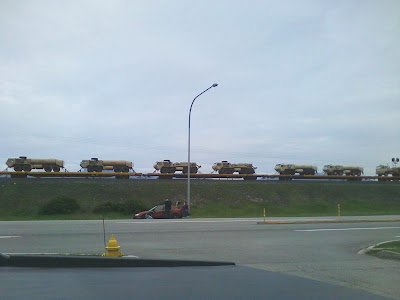 I know some of you are train watchers like me, so did anyone see this train go by about 8:00 last night? It was a REALLY long train and was just car after car of these and other military vehicles as far as the eye could see. The picture doesn't do it justice becaus it was almost dark, I was taking it with my phone and I couldn't get a good angle where I was standing. In person though it was really impressive but at the same time kind of somber because its a reminder of our folks overseas that are often out of sight, out of mind.
Posted by SRTC Staff at 8:57 AM