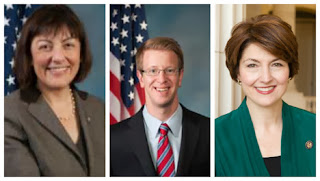 So far, three members of Washington state's congressional delegation say they will give up their pay during the current federal government shutdown, according to KREM 2 News.

U.S. Reps. Derek Kilmer and Suzan DelBene, both Democrats, and Republican Rep. Cathy McMorris Rodgers, all confirmed Tuesday they will forego their salaries for the duration of the shutdown. Members of the House and Senate make $174,000 a year.

While the three will automatically be paid during the time, they will return the amount equitable to their salary to the U.S. Department of Treasury. Since March, DelBene has been returning 8.2% of her salary, about $2,300 a month, to Treasury in response to across-the-board budget cuts, known as sequestration, that were done earlier this year.
Posted by SRTC Staff at 12:19 PM