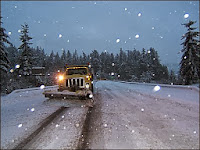 Grumble, grumble. I hate writing this post every year when I get this email from the Washington State Deparment of Transportation.
With winter just around the corner, crews from the WSDOT Eastern Region (our area), are getting prepared to handle snow and ice control duties.  About 200 crew members working two shifts, seven days per week are assigned to the 1,600 miles of state highways in the seven northeastern counties in the state.  The Region snow and ice control cost is about $13.7 million for the two-year budget cycle.

Snow and ice control crews and equipment are based at 20 locations throughout the Region.  The crews use nearly 100 truck-mounted snowplows, most of which include a system to spread sand or de-icer.  There are also 14 liquid anti-ice chemical trucks.

During the winter shift schedule, which starts in mid to late November, maintenance teams are normally on duty from around 4:00 a.m. to midnight or later.
Posted by SRTC Staff at 8:34 AM