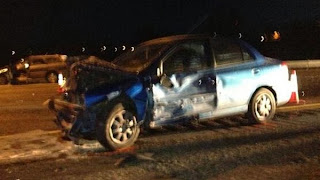 An accident involving multiple cars completely shut down westbound I90 near the Washington-Idaho State Line around 5:30 this morning, according to KREM 2 News.


The four-car crash is thought to be caused by icy conditions. It snarled traffic for a couple hours until lanes were reopened again at 7:20 a.m.
Apparently it was icy enough on the roads taht the Idaho Transportation Department have de-iced roads on their side of the state line.
Posted by SRTC Staff at 9:16 AM